Wonderful Things to Do from Surf to Turf

“The American Riviera,” as Santa Barbara, CA is widely known, has a great deal to offer the adventurous tourist. While some guests at The Eagle Inn may choose to enjoy wine-tasting tours, hikes in the mountains, riding mountain bikes or sampling Santa Barbara’s remarkable selection of restaurants and shops, other visitors may decide to stay closer to the ocean and go kayaking, fishing, surfing, walking along the beach, sunbathing or even taking a tour on a Segway. 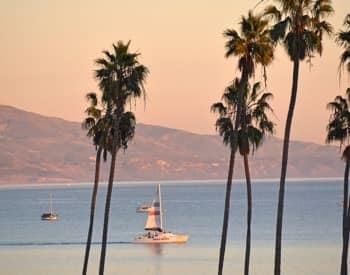 Enjoy the afternoon sun while you and your friends or family sail aboard Santa Barbara’s most popular sailboat, the DOUBLE DOLPHIN. Not only will you get to see some of Santa Barbara’s majestic coastline, but we frequently see California sea lions, dolphins, whales and a variety of exotic birds. Scheduled two-hour cruises depart at varying times throughout the day.

Join us for a romantic conclusion to a full day of sightseeing or a long day at work. Experience the majestic Santa Barbara sunset on a coastal cruise aboard the DOUBLE DOLPHIN. This two-hour cruise leaves at varying times throughout the year (determined by time of sunset). 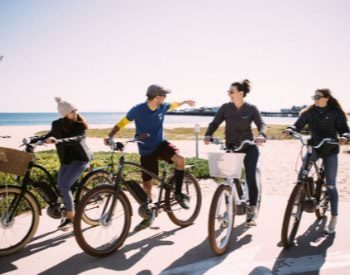 See all of Santa Barbara with a local guide from Santa Barbara’s #1 Bike Tour company. From the bike team: This tour will take you through the best bike routes, historical highlights, and great viewpoints of Santa Barbara! This bike tour has the potential to show you all if not most of Santa Barbara’s need-to-see spots. The tour is also private so you can chat with your guide about what things you want to see most and will allow your group to have a custom and personable experience! Don’t forget your camera as there will be plenty of photo opportunities. This fun and informative bike tour operates daily and is designed for all abilities. 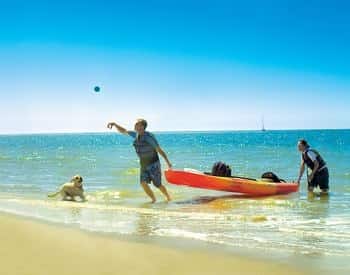 A Santa Barbara kayak tour is a great introduction to this exciting sport! This full day of paddling (shorter trips are available too) offers spectacular views of the city and beaches from a unique perspective on the water! Our journey takes us through the harbor, along secluded beaches, past sea lions, kelp forests, and a historic pier. The group will stop on a secluded beach for lunch, before completing a large loop, ending back at the harbor. 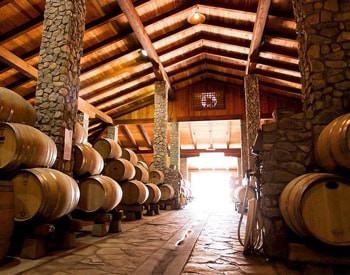 We’ll take care of all the details while you enjoy the heart of Santa Ynez wine country. Visit three local favorite tasting rooms surrounded by beautiful countryside and mountain views. Winery staff will offer insight into specific blends and selections while learning about the history of the area and how wine is made. The best part is that you don’t have to worry about drinking and driving. A gourmet deli lunch is served in the shade at a peaceful winery, including cold beverages with a souvenir wine glass. You will be picked up at The Eagle Inn in an air-conditioned van between 9:30-10:00 a.m. and delivered back between 4 – 5 pm. Private tours are available at additional cost. This tour is for people 21 and over. 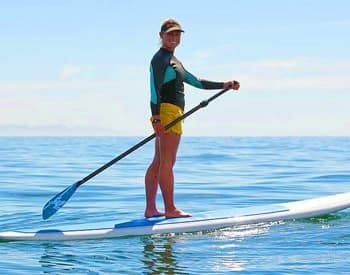 Your guide will provide your wetsuits (optional), paddles, and boards, with a basic paddling demonstration and safety talk. The group will launch from the beach, paddling past boats, through the historic wharf, under the pier, out to buoys, and along the beach. Guests almost always get to see wildlife such as harbor seals, sea lions, brown pelicans, sea stars, cormorants, and dolphins. 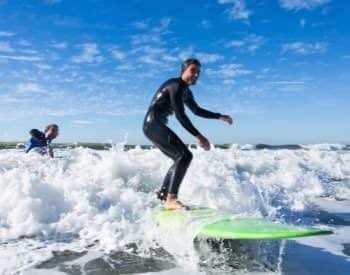 Learn to surf from Santa Barbara’s #1 Surf Lesson company. From the surf team: Our lessons are private so you or your group will have their own instructor and personalized experience. The majority of our lessons are for first-timers which are why our lessons include: a surfboard, wetsuit, and 90 minutes of private instruction. Typically, lessons are taught at beaches with a sandy bottom and gentle waves just a few miles south of Santa Barbara. 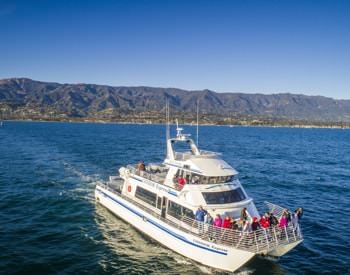 Whales can be seen year round

Pacific Gray Whales: Every year an estimated 28,000 Pacific Gray Whales will journey through the channel on their migration between Alaska and Baja California. On their way south, they pass along the Channel Islands, about 25 miles off our coast. Beginning in mid-February, as they make their way north again, the mothers and calves stay close to the Santa Barbara coastline, coming within a few hundred yards from shore. Join us for the experience of a lifetime as we journey alongside these magnificent animals on a 2½-hour whale watching excursion mid-February through mid-May.

Often on these trips we see Common Rissos and Bottlenose Dolphins, California Sea Lions and Harbor Seals. Occasionally, we are lucky enough to view Orcas, Humpback, Minke, and Pilot Whales.

From July through September, the Blue and Humpback Whales visit the area to feed on the krill produced in the Santa Barbara Channel. In recent years, the largest concentration of Blue Whales in the world has been in our channel, in addition to large numbers of Humpback Whales, which are usually seen off the coast of Hawaii. 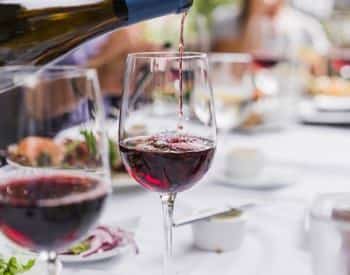 Sit back and relax. We’ll take you on a tour of the wine country, where you will visit some of the finest wineries in the Santa Ynez Valley. Your tour guide will provide a fun and informative narration along the way. Learn the basics of wine tasting, hear about the history of the area and the population, learn how wine is made, and see beautiful countryside and breathtaking mountain views. All without the worry of drinking and driving. Tastings at three or four wineries. Souvenir wine glass. Gourmet picnic lunch. 9:30-10:00 a.m. pick-up at the hotel. 4:30 drop-off at the hotel. Private tours available at additional cost. This tour is for the over 21s only.